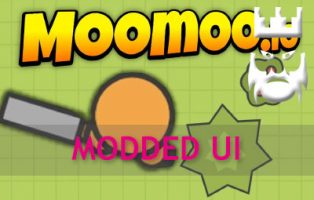 MooMoo.io modded UI is finally out and can be downloaded via godmods.Com. Using this script you can removes unnecessary cards and ads, and make a bigger changelog text after update. It also adds reset ability of server list. Of course there are other small UI improvements. The UI will be hidden after 10 seconds. godmods.Com did test this hack as of 29 December 2017.

Attention: None of the mods and this MooMoo.io modded UI published on our pages belong to our website. Due to the nature of the mods, they are developed by independent developers and published on the internet. As God Mods we compile the most popular mods on a single page for any io game. We do not accept any responsibility for any possible unwanted conditions due to the use or download of these mods. Users should download these at their own risks and we never store any part of these mods in our databases.