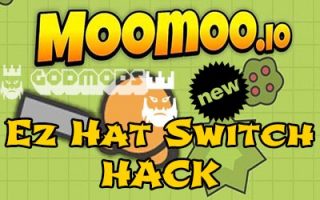 Features for Moomoo.io Ez Hat Switch Hack: Give yourself an advantage over the other players.

Details for Ez Hat Switch Hack: Use this to “ez”ly switch your hats during a MooMoo.io game. You can also customize what keys switch to a certain hat. You can add as many keys as you want and as many hats as you want. In case you do not know how to customize it (instructions in the code) or you just want to stick with the default hats/keys here are the hats/keys:

Attention: None of the mods and this Moomoo.io Ez Hat Switch Hack published on our pages belong to our website. Due to the nature of the mods, they are developed by independent developers and published on the internet. As God Mods we compile the most popular mods on a single page for any io game. We do not accept any responsibility for any possible unwanted conditions due to the use or download of these mods. Users should download these at their own risks and we never store any part of these mods in our databases.