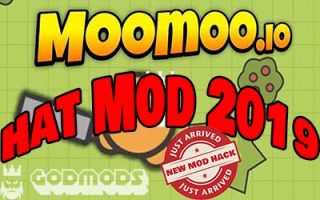 Features for Moomoo.io Hat Mod 2019: MooMoo.io vision mod and hat mod! This is a nice vision mod a made and hat mod its two scripts lol but both mine I give credit to flarez and FΣΓΔΠΨZΣΓΛΓ cause I used some help from flarez and use some peaces from their scripts also cumhur
subscribe to flareZ
if you see me playing moomoo.io say hi I am ?ASSASSINbot? in sandbox im ?ASSASSINs Bot? my team name would be
?Bot?

Attention: None of the mods and this Moomoo.io Hat Mod 2019 published on our pages belong to our website. Due to the nature of the mods, they are developed by independent developers and published on the internet. As God Mods we compile the most popular mods on a single page for any io game. We do not accept any responsibility for any possible unwanted conditions due to the use or download of these mods. Users should download these at their own risks and we never store any part of these mods in our databases.