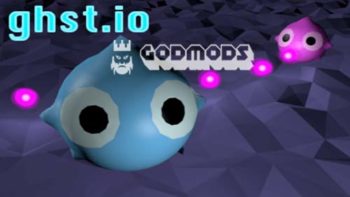 Ghst.io is a 2D shooter io game with available upgrades to your character.

Hunt down ghosts and upgrade your character. Thrilling arena pvp game with 3D graphics and lots of action. Access to all Ghst.io hacks and unblocked Ghst.io mods on godmods.com. Free to Play Ghst.io on godmods!. We advise you to visit godmods.com from time to time, because new hacks and mods or aimbots might be released for unblocked Ghst.io.

Use mouse to steer, left button to shoot, left shift to burst and number buttons to upgrade.Destroy small ghosts to refresh your mana. Pink ones give you a new weapon.

Be smart with your mana. If you save your mana for bursting you can easily escape high level players and hunt down small ones. Use your mana for shooting only when you know you’re going to hit. 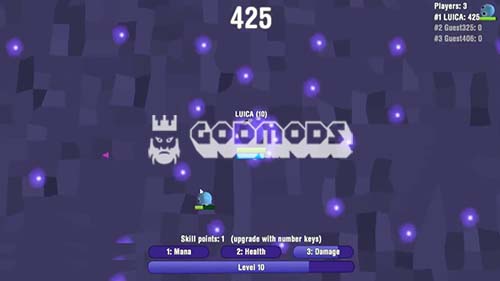 Every weapon has a different strategy:Circle is most powerful when you shoot it while on top of an enemy. It can also be useful for shooting at chasers or while circling with an opponent.Spread is very powerful from close range. Keep your weapon as a secret until you are close enough so you don’t scare away the pray.Frenzy is the ultimate farming weapon with highest DPS.Homing is the skill weapon with lowest DPS but ability to shoot from angles where the opponent can’t get you. You can kill even high level ghosts with this weapon with pure skill.

Play Ghst.io with Unblocked Aimbot, Mods and Hacks features. Also You can download All Ghst.io Aimbot, scripts, hacks and all mods on godmods.com