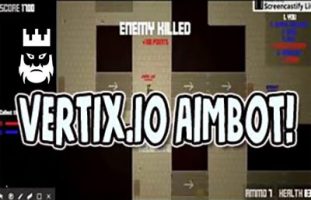 Vertix.io Aim Bot  Climb the leaderboards by never missing a shot again. This script targets the closest enemy. While playing Vertix.io, you can activate/deactivate the aimbot by holding the Shift key.

Go to Vertix.io and enter a game. Hold Shift to aim at the closest player. Release Shift to return to normal controls. You may wish to stop the leaderboard from appearing (while pressing Shift) by changing the controls on the Vertix.io front menu. You still have to click to shoot.

Attention: None of the mods and this Vertix.io Aim Bot published on our pages belong to our website. Due to the nature of the mods, they are developed by independent developers and published on the internet. As God Mods we compile the most popular mods on a single page for any io game. We do not accept any responsibility for any possible unwanted conditions due to the use or download of these mods. Users should download these at their own risks and we never store any part of these mods in our databases.